With some time off work, this is the time for me to catch up on some writing, you lucky people.  What better time to sit down and discuss the phenomenon of festive food and it’s televisual counterpart.

I began my journey with the legend herself, Ms Fanny Cradock.  There were two quick episodes on Good Food Channel, one focusing on mincemeat, t’other on Christmas pudding.  In episode one, our main ingredient is described as “the Cinderella of Christmas” and such delights as mincemeat pancake, galette and OMELETTE (eggs with flakes of butter, nothing else) are created, right before our eyes through a fog of icing sugar.  Icing sugar on everything and about a centimetre deep too.  The speed in which she works is pretty astonishing: no messing about.  Fanny would do very well in the omelette challenge with James Martin, I can tell you.  Eggs are mixed together, pastry unfolded and costume jewellery glistens in grease.  Ladies and gentlemen, I give you the 1970’s.  The next recipe is for a tart.  Pastry is lowered into a shallow, round cake tin and filled with mincemeat.  Fanny cracks on saying “I’m not going to explain it all to the older people, you know all this stuff.”  Nice to see – basically, “you’re all old enough to know how to make bloody pastry and form it into a tart shape, now let’s get on with it”.

We move swiftly on to a Swiss roll filled with, yep the ‘meat.  The sponge is pre-prepared and handed over by Sarah (aka Poor Sarah) and various maxims are uttered such as “everything is so much better when you know how”.  Thanks.  We are advised that you need a good quality rolling pin – not one with handles though: “that’s the best kind, the professional kind.  Maybe you’ll be lucky enough to get a rolling pin in your stocking”.  If I did, I might be lucky enough to hit my husband round the head with it.

Delia Smith is a more recent Christmas icon.  Carsmile still swears by her instructions for turkey or goose from the ‘Complete Illustrated Cookery Course‘ 1992 edition (originally published in 1978).  As is the way on speciality channels, we are served up a whole evening of her 1990 series, Delia at Christmas.  This particular episode began with the words “I don’t agree with vegetarianism…” but she humored us with a selection of recipes for cheese terrine, stuffed peppers and ‘sausage’ (cheese and herb) rolls.  An issue with the screening of classic shows is the aspect ratio as Delia invited a friend over to explain the delights of fizzy wine.  “You don’t have to stick to Champagne,” said the very wide sommelier, “there’s other fizz out there like Cava or this stuff from India!”  I’m not sure if I was more excited about the Indian wine or the amazing shoulder pads.

The following installment was the legendary “36 Hours of Christmas” and I started to wonder why programmes continue to be made on the subject of Christmas turkeys.  People moan about dry, tasteless meat but once you know the best way to do it, why bother with anything else (“everything is so much better when you know how”)?  Now we are acquainted with Delia’s technique, I don’t care about Gordon’s recipe or even Jamie’s version.  But the more shows I watched, the more I noticed the seemingly endless ways of cooking the festive bird.  Lorraine places a bag of frozen peas on the breast before it goes into the oven to slow down the time it takes that part to cook, Nigella sticks her poultry in a gigantic red bucket (to match her silky, red dressing gown) with herbs and spices to add moistness and don’t even get me started on the stuffing controversy!

END_OF_DOCUMENT_TOKEN_TO_BE_REPLACED

and finally, monsieur, a wafer-thin mint

“Do not join those who drink too much wine or gorge themselves on meat, for drunkards and gluttons become poor, and drowsiness clothes them in rags.”

Thank you, sir, and now the check.

So, me and my friends would regularly chatter on about last night’s Masterchef or the merits of Slater over Stein.  Eventually, those who did not care for food-based telly programmes (I know, they do exist!) cried ‘shut up and blog it!’.  So, here we are.  It has taken me some time but, once outside of my Masterchef bubble, I have realised just how many cookery shows there are!  Bloody loads.

It was requested that I compile a list of current shows so my fellow bloggers won’t miss a morsel.  Happy to oblige.  It took me a while and I’m considering posting a permanent weekly/monthly list so our readers can also keep up.   END_OF_DOCUMENT_TOKEN_TO_BE_REPLACED

So, home alone for the night, I decided to start watching my eight hours of cookery nonsense that’s stacking up.  First up is two episodes of ‘Perfect…’

‘Food For Friends’ and ‘Curry Night’ were on my telly menu.  The deal is thus:

FFF pitted Paul Merrett against Allegra McEvedy and the starter dishes were so-so (ham and pea croquetas and crab on toast with serano ham/fig ciabatta).  The classic round is where both chefs make the same dish.  It’s quite interesting to see how each chilli con carne, in this case, differs and little vox pops of other chefs tell you their favourite way of cooking it.  I love that chefs have no qualms on things like baked beans being an essential ingredient of chilli!  Now, the ultimate dish was quite interesting too.  Allegra’s rabbit lasagne sounded pretty awesome with Paul’s bouillabaisse also looking exciting if a bit too much fanny dangle. END_OF_DOCUMENT_TOKEN_TO_BE_REPLACED

it’s saturday morning and who’s gonna play with me

So, y’know, with my head jammed with thoughts of Masterchef, what’s for dinner and what restaurant will I be taken to for my birthday [hint, hint] I can’t help but rise bright and breezy each Saturday morning and wonder “who’s on Saturday Kitchen today?!”

In recent weeks the producers have really pulled it out of the bag – Jamie Foreman was pretty awesome, Chris Isaak took me back to my youth and this week, Jennifer Carpenter.  Yes, she’s a glamorous, svelte lady but she tucked into her cream tea (Cornish or Devon, not quite sure) with complete abandon.

END_OF_DOCUMENT_TOKEN_TO_BE_REPLACED

i’d quite happily put my face in it

I think if a certain Mr G Wallace Esq were ever a guest judge on Top Chef: Just Desserts he might actually explode.

I’ve watched quite a few series’ of Top Chef and Top Chef: Masters over the years – they have the intensity of your MC OZ (screened six days a week) combined with our own MC: The Professionals.  Contestants on Just Desserts are all pastry chefs of differing experience and abilities with their main judge and pastry king being 50’s throwback Johnny Iuzzini.  Gayle Simmons is our master of ceremonies (a regular TC judge) and the Arsene Wenger of French cuisine, the wonderful Hubert Keller, completes the head panel. 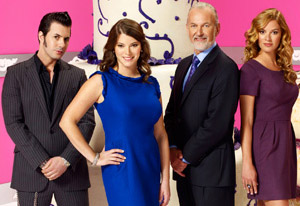 Iuzzini, Simmons, Keller & the other one

Season openers always begins with the 12 (or so!) chefs meeting for the first time – it’s a common occurrence that there are familiar faces or the people have crossed pastry paths in the past.  The judges turn up and give them their first challenge.  “I couldn’t believe how beautiful Gayle was in real life and how Johnny’s eyes starred deep into your soul” was how one chef put it.

Let me tell you now, JD is camp.  Very camp.  You are beset by a visual feast of pink, chocolate, sugar and cream – your teeth will itch.

END_OF_DOCUMENT_TOKEN_TO_BE_REPLACED

where every day’s food science day

Chris is our bow-tied head master of the test kitchen, home of Cook’s Illustrated magazine.  Here they take a classic dish, do some science and make it perfect.

This is a pretty fascinating show that incorporates gadget testing along with a Letters to the Editor segment.  The episodes I saw tested apple corers, barbecue meat trays and kitchen knives.  Much of show focuses on barbecues; how to get an even cook, what tools to have and how to take care of the grill itself.