blood on the dance floor

With Masterchef Australia (season 6) galloping towards its conclusion, the two hour New Zealand (season 4) final was screened last week on Watch. NZ may not have the vastness nor the glamour of its AUS counterpart but it gets the job done.

They live in a large, modern house as, one by one, they are eliminated and by the season finale we are left with two cooks: Aaron Brunet and Paula Saengthian-Ngam.  Aaron seemed to be a winner from day one.  His food was sophisticated and tasty throughout, pretty much.  On the rare occasion he made a mistake it was noticed and commented on by his competitors.  He was even nicknamed the ‘Aaronator’. Ultimately though, he made it to the final without too much drama. 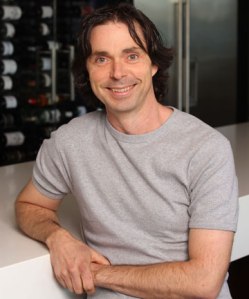 Paula’s route wasn’t as easy but she got there by making some tip top classic dishes and using her knowledge of Thai flavours to her advantage.  Clearly the Masterchef experience filled her with confidence and a new direction in life.  One that didn’t include her husband, it seems.  “The show gave me the strength to end it. It made me realise that I didn’t really miss him. He didn’t understand why I wanted to do MasterChef.”  Okaaaay!

In standard overseas practice, the final was split into four challenges with marks out of 20 given by the judges.

First up is the taste test.  A giant vat of Ray’s bolognese was brought out and our cooks had to guess all 20 ingredients (beef mince, pork mince, cream and white wine among them, YUM).  Aaron leads 14 – 12.

Tony Astle, who’s been cooking for 40 years at Antoine’s, pops up to inspire them for the entree challenge.  Paula nails it with a duck salad to take it 32 – 25.  This is particularly impressive as events were temporarily halted due to the ‘incident’.  Now, there are quite often little mishaps in the Masterchef kitchen, now matter where in the world you are.  Many cooks exclaim, “I’ve chopped the end of my finger off but I can’t give up now”.  Yeah, right.  If you’re gonna chop your finger off, do it properly.  Poor Paula uttered the fateful words, “I usually nick myself with the mandolin but I’ve been alright today.  So far!”  Cue blood dripping down her hand and a scary amount on the floor.  Thankfully all was good in the end.  She pulled off a great dish.

So, cracking on, who walks through the door for the main course?  It’s a pressure test so someone good I hope.  GEORGE!!  George Calombaris!  Hooray!  He challenges them to reinvent the roast chicken by giving them the recipe for his Press Club chicken and vegetables, YUMYUM!

Aaron does well with birds having excelled at a previous challenge.  Not a turducken, oh no, a TURDUCKENQUA. 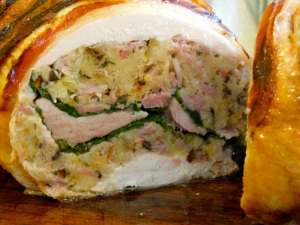 Paula loses the plot and spilling sauces but maintains a 46 – 43 lead.  We head to the final round and pudding.  A nail biting affair and Aaron wins 75 -74.

What?  What’s that, you say?  What was the pudding challenge?  Oh, nothing.  Nothing worth discussing. No, you don’t need to know. 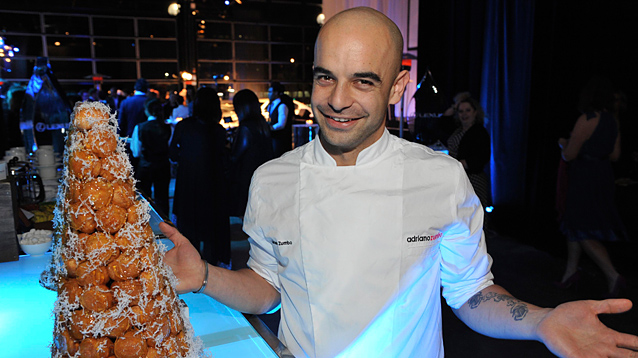 YOU ARE SHITTING ME!