With some time off work, this is the time for me to catch up on some writing, you lucky people.  What better time to sit down and discuss the phenomenon of festive food and it’s televisual counterpart.

I began my journey with the legend herself, Ms Fanny Cradock.  There were two quick episodes on Good Food Channel, one focusing on mincemeat, t’other on Christmas pudding.  In episode one, our main ingredient is described as “the Cinderella of Christmas” and such delights as mincemeat pancake, galette and OMELETTE (eggs with flakes of butter, nothing else) are created, right before our eyes through a fog of icing sugar.  Icing sugar on everything and about a centimetre deep too.  The speed in which she works is pretty astonishing: no messing about.  Fanny would do very well in the omelette challenge with James Martin, I can tell you.  Eggs are mixed together, pastry unfolded and costume jewellery glistens in grease.  Ladies and gentlemen, I give you the 1970’s.  The next recipe is for a tart.  Pastry is lowered into a shallow, round cake tin and filled with mincemeat.  Fanny cracks on saying “I’m not going to explain it all to the older people, you know all this stuff.”  Nice to see – basically, “you’re all old enough to know how to make bloody pastry and form it into a tart shape, now let’s get on with it”.

We move swiftly on to a Swiss roll filled with, yep the ‘meat.  The sponge is pre-prepared and handed over by Sarah (aka Poor Sarah) and various maxims are uttered such as “everything is so much better when you know how”.  Thanks.  We are advised that you need a good quality rolling pin – not one with handles though: “that’s the best kind, the professional kind.  Maybe you’ll be lucky enough to get a rolling pin in your stocking”.  If I did, I might be lucky enough to hit my husband round the head with it. 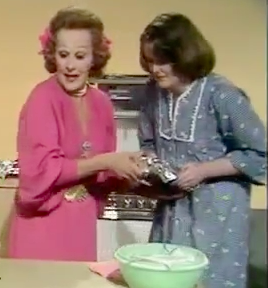 Delia Smith is a more recent Christmas icon.  Carsmile still swears by her instructions for turkey or goose from the ‘Complete Illustrated Cookery Course‘ 1992 edition (originally published in 1978).  As is the way on speciality channels, we are served up a whole evening of her 1990 series, Delia at Christmas.  This particular episode began with the words “I don’t agree with vegetarianism…” but she humored us with a selection of recipes for cheese terrine, stuffed peppers and ‘sausage’ (cheese and herb) rolls.  An issue with the screening of classic shows is the aspect ratio as Delia invited a friend over to explain the delights of fizzy wine.  “You don’t have to stick to Champagne,” said the very wide sommelier, “there’s other fizz out there like Cava or this stuff from India!”  I’m not sure if I was more excited about the Indian wine or the amazing shoulder pads.

The following installment was the legendary “36 Hours of Christmas” and I started to wonder why programmes continue to be made on the subject of Christmas turkeys.  People moan about dry, tasteless meat but once you know the best way to do it, why bother with anything else (“everything is so much better when you know how”)?  Now we are acquainted with Delia’s technique, I don’t care about Gordon’s recipe or even Jamie’s version.  But the more shows I watched, the more I noticed the seemingly endless ways of cooking the festive bird.  Lorraine places a bag of frozen peas on the breast before it goes into the oven to slow down the time it takes that part to cook, Nigella sticks her poultry in a gigantic red bucket (to match her silky, red dressing gown) with herbs and spices to add moistness and don’t even get me started on the stuffing controversy!