RSS
← somewhere, Brendan is stroking a white cat…
don’t be afraid of it, it’s only a biscuit! →

Having spent a lovely week in Edinburgh seeing lots of Fringey things, the lady occupying the adjacent seat on my journey home decided to catch up with Celebrity Masterchef.  Yep, seen that one – he does something with a crocodile.  Oooh, not seen that one – concentrate on your book, Fanny.  No spoilers!

I managed to reach the comfort of my sofa not knowing the outcome so cracked on with some catching up of my own. 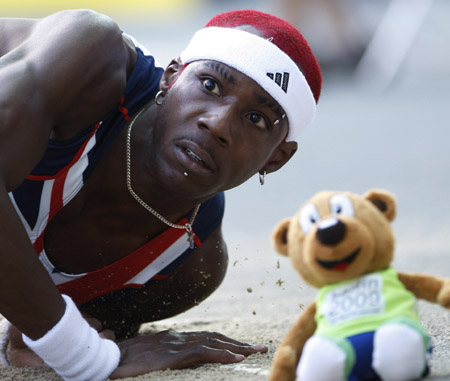 It’s always interesting to see sporty types on the show.  Do they dazzle like Matt Dawson or will they perplex like Steve Parry?  Phillips Idowu definitely showed promise towards the end but in a group of cooks that were gaining confidence each day, the man with the sparkly eyes had to wave goodbye.  Though John Thomson started the week well he took too many backward steps and seemed to lack spirit.  Maybe it was the result of a nasty cut as detailed here.  Still, all in all a good week.  Ade is getting stronger and should go far.

Judging by this week’s contestants, Ade and Denise won’t have much of a problem if they face Brian Capron or Shappi Khorsandi!  Billed as ‘Coronation Street serial killer’ I know him as Grange Hill’s Mr Hopwood and barely looks any different at 66.  I’m tempted to say that Shappi’s a ringer; can anyone be that bad?  When left to her own devices and her mum’s spice rack however, she impressed the judges.

While we’re on the subject of judges it seems our panel of previous finalists who critique the two course meals have been cloned.  Those who were once nervous bundles of energy who gaze up at Torode, eager for a morsel of praise have become snooty, convinced they’re the new Jay Rayner.  Was Andi Peters always picky and prissy?  I don’t remember Emma Kennedy being quite so well spoken and fussy.

Now we’ve reached the end of week three Mr Hopwood has suddenly discovered his inner chef!  Well done, sir.  Shane continued pretty awesome with his weird hand tattoos – that Wagyu beef sounded amazing.  I was actually envious of those lucky enough to have got their laughing gear round that hunk of beef.

‘Hmm, Tucker, this cup of tea is delightful; you should try out Masterchef – not the Lloyd Grossman one’

Having a sneaky peek at the next batch of cooks we could be in for a doozie as Les Dennis and co flounder in the mass catering challenge.

Question!  If you’re up against it timewise and have to prepare a vegetable curry, for example, would you chop ALL your ingredients into two inch chunks?  Do you really think aubergines, carrots and leeks are perfectly cooked in 20 minutes?  Yeah, lather them in some nasty looking cheese sauce, they’ll never notice.

← somewhere, Brendan is stroking a white cat…
don’t be afraid of it, it’s only a biscuit! →

One response to “go big or go home”