oh now paula. I think it’s time that you should go

It was a while ago now but in April we took a trip across the pond to NYC.  This was my fourth visit so I’d been up the Statue of Liberty, Empire State Building – I’d done the tourist stuff.  This time I meant business.

Staying in Williamsburg, we took in the sights of Bedford Avenue, the High Line and some art by Chelsea Pier.  Of course, I’m married to a beer freak/geek so we drank at some very nice pubs and as a confirmed wine drinker I was slightly fearful of our guided tour of the Brooklyn Brewery.  It was great; I sampled some beer!  I didn’t really like it!  Never mind.  We previously visited the Ginger Man where I consumed a bottle of the only beer I actually DO LIKE.  I really like.  Carsmile tells me “typical that you like Duchesse de Bourgogne – the only beer that is unlike any other beer!”  Unique.  Classy.  That’s me.

Apart from the wrasslin’, it was all about the food for us this year.  Our flat had the Food Network so I got a chance to witness the goddess of fried, sugary, homely food that is Paula Deen in all her glory.  I was familiar with Ms Deen through watching Top Chef and was chuffed to see her in action.  Wow, so much butter, cream, sugar and syrup.  Still, she looked like she was having a lot of fun.  Maybe she was on a sugar rush – I’m going to go out on a limb here and suggest that she may not have her own full set of gnashers.  That must help in some way with the awesome amount of sweetness and richness of her desserts.  I really think that if Gregg Wallace met her, it might be love.

“we must have a pie. Stress cannot exist in the presence of a pie.”

END_OF_DOCUMENT_TOKEN_TO_BE_REPLACED

whose Roux is who’s?

“Oooh!  Wotsthat??!” I exclaimed as the 476 bus whizzed through North London just the other day.  A poster advertising what looked like a cookery telly show, thatswot.  But Roux Jr’s lovely, smiley, dark-eyed face was strangely replaced by a frown, a glare – rather scary.  He was joined by a terrifying looking Rick Stein and Angela Hartnett seemed grumpy as heck.  What could this mean?  All these amazing chefs judging one show together – gonna be a-MAZING, amirite?

The Roux Scholarship 2013 is a mish-mash of a programme.  After the series opener it seems to be two parts Masterchef: The Professionals and one part The Apprentice.  We return from each commercial break to meet our hosts, Roux Jr and his near incomprehensible uncle.  For some reason they are at the top of the gherkin tower muttering “WHO will be the winner of the Scholarship for 2013?” and “only ONE can be declared our winner!” 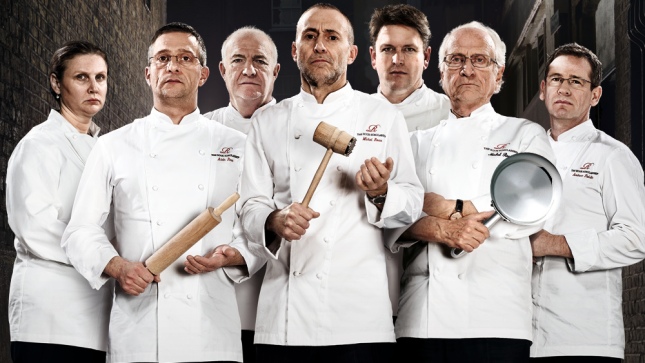 I could talk at length about this but, as usual, Mr Danny Baker sums up correctly:   END_OF_DOCUMENT_TOKEN_TO_BE_REPLACED