*in a good sense 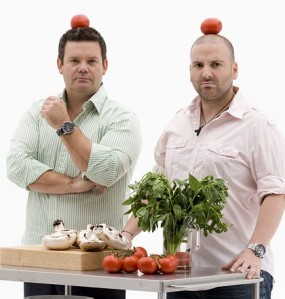 Is OzMC the crucible for all the best MC trial-by-concept moves? The just-ended O/G MC (feat.Toad&Gregface) seemed oddly and anxiously in its shadow — with the introduction of Toad’s make-my-masterpiece test a hurried and blodged redux of a Gary&George move. Natalie is lovely and clearly a deserving winner — in a very strong amateur final three — but the series seemed skimped and hurried, with the cutaway-to-gurning factor higher than ever. Too much cheaty editing. JohnT seemed uncharacteristically stressed in the later stages, also (and Gregface more unwatchably over-parodic; all these tics he doesn’t really earn by DOING anything except eating and letching).**

Thing is, Gary&George (&Matt&Matt) give themselves so much generously longer, with their 90-mins masterclasses following the trials, and the endless succession of high-end cookery names cheerfully coming in to present the masterpieces to be there and then made at sight (and taste), and really almost none of them being as d!ckishly brittle as the worst sleb-chef guests on O/G MC. (I’m judging by 2011, which I’m currently watching on Really: it’s more than three months in, and we’ve just reached their final three. 2012 I haven’t seen.)

I love the sheer space the OzMC project has (its mutable warehouse of a main building, the chapterhouse they all share — gradually empyting, a fact with some emotional charge — and of course the acres and acres of time*** they have). I think all this brings out the best in Gary especially — or perhaps that somehow he and George have cast a kind of shrewdly avuncular spell over it all, to bring a very vivid sense of companionship-in-shared-tribulation, and yet — once a week — reminding everyone quite bluntly of the shape and stakes of the competition. “At the end of tomorrow, one of you will be this year’s masterchef and one of you will be going home.” (I’m glad they dropped the contestants vote-out section: it made the show a bit too bastardly and big brothery…)

The social dimension of food — which is after all the most important aspect of it after basic nutrition — is pretty easy either to smother, in a competition which at least potentially fractures and fragments the actual micro-commmunity engaged in it (as players and refs), or to gloze with sentimentality. Possibly I have a higher sentimentality threshold than many, but I think — in this series at least, OzMC 2011 — they’ve done pretty well by it. There’s a touch too much cheaty editing — one over-dramatising of a blender breaking down, which turned out to be nothing, all the amplification of anticipatory dramas pre and post adbreaks (so you don’t switch over). And obviously this is a high-end and a luxury activity in many ways — I fret about the potential waste, given how much beautiful produce is not used at the end of any given day — but that doesn’t stop it being endlessly fascinating also, at least to me. Would watch again vg tick.

**To be absolutely fair GW did hug-comfort Dale after hateful ogre**** Marcus Wareing made him cry. And though the weightwatchers ad is hardly a masterpiece of the admaker’s craft, he comes across less intolerable because the directors (or clients) sensibly shy away from his worst ticcy shtick.
***Be intrigued to know how close to “real time” it actually is, to one day per programme, excluding flights to New York and such.
****An ogre on Masterchef only, I’m told.

2 responses to “OzMC the Unending Ordeal*”