On a wintry Saturday lunchtime, after wolfing down scrambled eggs, bacon and toast (with brown sauce) I happened to spot a triple bill on BBC2.  Country Show Cook Off.  Never heard of it.  Loved it.  The title sequence tells you all you need to know; a pair of top quality, celebrity chefs travel the country in a gorgeous Citroen van (H type, apparently) trying their luck at winning a rosette at a country show.  And it’s as difficult as it sounds.  As suspected, this show runs weekdays with a new set of chefs each week.  These catch up episodes featured Galton Backiston and Jun Tanaka with the smirky voice over talents of Ainsley Harriott. 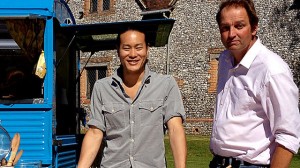 I was immediately struck by the beauty of the vehicle (I’m almost tempted to learn how to drive just so I can have one) and, hold on, the curtain material!  I have that very same fabric for my kitchen cushions.  My kitchen that is an almost exact replica of Dot Cotton’s, I kid you not.  Not intentional either. 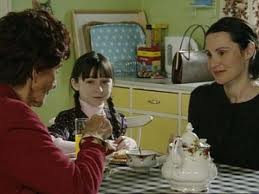 We start our travels in Glendale, home of Postman Pat, where our chefs are entered into the ‘fruit tart in pyrex’ competition.  Seems easy enough.  The tart should be cooked and presented in a pyrex dish.  Off they go to set up their trestle table, in the glorious sunshine and create a tart.  Jun goes for a pastry base topped with lots of sliced strawberries and a glaze of watered down jam sprayed over the top.  Galton chooses a creme pat style tart with a variety of summer fruits and a champagne glaze.  Both look glorious but are they too poncey for the judges?  What awaits them at the country show?

PIES!  That’s what.  They are literally stunned as they place their fruit tarts in pyrex on the table along side pie after pie after pie.  Galton cannot control himself and exclaims “THAT’S NOT A FUCKING TART!” which, judging by Jun’s expression, is exactly what he’s thinking.  The judge with 25 years experience tells them that a tart has a pastry lid and theirs is classed as a flan.  Deal with it, smartarsedmotherfuckers.  Well, she didn’t actually say that bit but she may as well have.  That’ll show Jun with his earlier comment; “you don’t expect people up north to have Champagne on their tarts, hahahaha!”  Maybe not, but they know their country shows, smartarsedmotherfuckers.  They briefly entertained the idea of dropping their dishes so they could be considered in the ‘disaster class’.

I felt sorry for our chefs, as I too would have created a TART, not a pie, but there you go.  Now, don’t get me and my friends started on what constitutes a pie.  You will be here all night.  Our next episode took us to Devon where they were entered in the seafood platter section.  Even though Jun’s lobster consume was pretty much hated by all, he pulled it back with his crab balls (pardon the expression) and won 1st place.  His picnic basket presentation must’ve helped somewhat.  Galton took 3rd which he was pleased with but he’s yet to get a top prize.  They left Clovelly happy but the pie issue was still wrangling Jun who referred to it as Piegate.

Out final trip of the week took us to Henley, where the cliches continued.  Oop North there were Barbours, tarts with lids and no nonsense judges, in Henley the mummies wore designer sunglasses and our chefs hung out with an award winning organic farmer.  This is where Jun picked some carrots for his cake as they were competing in the ‘six small, identical cakes with decoration’ category.  Jun’s carrot cake, made in rectangle tins with green topping, had marzipan carrots embedded in them.  They wilted somewhat in the heat but the judges congratulated him on a tasty cake and awarded him 3rd spot.  Galton, desperate to get top prize, created square Victoria sponges coated in chocolate ganache, rolled in praline and topped with raspberries and hazelnuts.  Guess what?  He won!

Good job all round, boys.  There was sun, there was swearing but most of all there was a lot of fun.  On a snowy March afternoon, what more could you want?