to eat, and to drink, and to be merry

I was a little surprised upon hearing of the return of the classic BBC series ‘Food & Drink’.  Surprised yet pleased.  I was a little ‘meh’ about it being hosted by Chef Michel Roux Jr.  I know, I know.  He’s a legend and I love him dearly but this was a great opportunity to launch a new face on the cookery telly universe.  Or is it better to be guided through this culinary journey with a familiar and lovely face like his?

Food & Drink launched in 1982 thus I was too distracted by Adam Ant and Shakin’ Stevens to notice Simon Bates and Jilly Goolden.  I did discover the series in later years but memories have become faded and blended with those of early Delia and Rhodes. 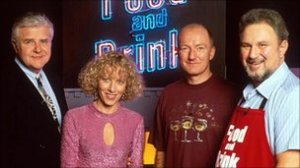 Anyway, it’s back, back, BACK!  And not in some studio set up a la Saturday Kitchen, oh no, they’ve stolen Lorraine’s stark kitchen diner from which to create some yummy food and discuss the latest consumer issues (they’ll be a bit busy if it’s been filmed in the last few weeks!).  F&D II, or F&D Babies (y’know, like Muppet Babies but with chefs?), does introduce one new face however.  The resident drinker is Kate Goodman, a wine merchant from Manchester and pretty good she is, too.  It must be thing – all wine types have that extra bit of enthusiasm, don’t they?  Think of Olly Smith and Susy Atkins.  Enthusiastic.  Kate selected three drinks to accompany a pork and apple recipe created by Michel and Tom Kerridge: a cider, a non alcoholic spiced apple drink and some wine.  Being a West Country boy, Tom was quite taken by the alcoholic apple juice but there was no beer selected much to the chagrin of Carsmile.  There have been guarantees that real ale will make an appearance at some point which will please the growing army of beer connoisseurs.  Even as someone who does not partake in beer drinking I agree that discussing the option of beer matching with your meal is becoming a ‘thing’ and someone should definitely bring this to the fore.  Pete Brown?  Sophie Atherton? 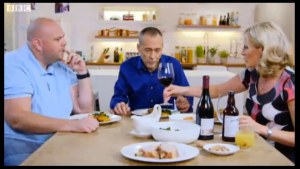 Back to the matter at hand.  Do we actually need F&D in 2013?  There are more cookery shows than you can shake a whisk at (I know, I’ve bloody watched enough), Stefan Gates as well as Jimmy Doherty explain where your food comes from and chefs tell us at any opportunity that ingredients must be LOCAL and SEASONAL.  Still, we got to see our F&D hosts chow down on mealworms and have a real, highbrow debate on finding alternatives to eating meat which was basically, “YUCK!  That’s minging, that is!”  Next week: Gizzi discusses foie gras.

Posted by Meg the Marauder on February 17, 2013 in BBC, Michel Roux Jr