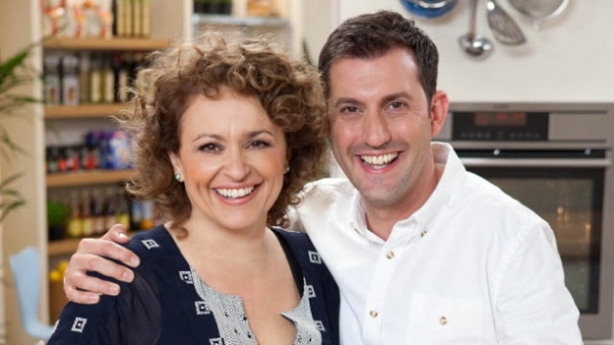 Saturday Cookbook is just fucking weird. ITV’s stab at getting the early doors Saturday Kitchen ‘market’, it’s on at the frankly unpleasant time of 8.25am, with Nadia Sawalha and Mark Sargeant, a Michelin chef but with the demeanour of… well, a Saturday morning TV host, really. He’s arrived.

From the opening, stagey, yes-we’re-really-here-drinking-tea-right-now onward, it’s an awkward television exercise. The format is a straight rip of of SK, with really basic GSCE Home Economics recipes, but the producer has decided to distinguish it from the BBC rival with seasick handheld camerawork (WHY?), constantly cutting to close-ups of faces (WHY?), crap sound, shitty graphics and deciding to ignore blatant innuendos rather than celebrating them – Harry Hill would tear this to shreds. The special guest is ‘chef’ Aaron Craze, proper-tat-geezer who occasionally interjects with “Gotta say you’re lookin’ fresh!” and the like. Nadia Sawalha looks happily confused as the lay sleb, breezily dropping in what she reckons at every opportunity.

There’s a clunky ‘what’s in your shopping trolley’ bit (with a real trolley), as guest Fay Ripley tries to squeeze her cheery, healthy schtick past Sawalha’s Partridgisms, then some more just-splodge-it-around cooking before Aaron Craze turns out an everyman mixed herb and nut pesto which is actually pretty interesting.

The whole thing appears to be put together with the cheapskate, oh-fuck-it-they’re-idiots grace characteristic of off-peak ITV these days. I know it’s not aimed at me, and not every food show requires Pierre Koffman cranking up the sous vide to get me going, but the game has changed, sorry. Must try harder.

Posted by takotsubo on April 22, 2012 in Uncategorized